This post is dedicated to my grandfather, Yat-Kwong Ho, who passed away today in Hong Kong at the age of 96. Thank you so much for raising such a remarkable son, and for giving me all the opportunities in the world. May you rest in peace in the presence of God.

There’s something so special about seeing a town at its sleepiest. That time when the sun is just peeking out, but the cool of night still remains in the air, along with the anticipation and promise of the coming morning. You see the preparation for day that often falls unnoticed into the background…owners arriving at their stores, waiters shaking out restaurant cushions before the breakfast rush. As you cross paths with other early risers and acknowledge each other with a slight smile, you feel like you’re part of a secret club eluding those still warm in their beds. Silence feels sacred in the air, broken only occasionally by a passing car, a bird chirp, or the jingle of a donkey bell.

Or rather, a whole host of donkey bells. Yes, this morning I arrived on the gorgeous island of Santorini, renowned for its gleaming white houses, volcanic rock beaches, and cliff stair-stepping donkeys.

My plane landed at 6:15am, ensuring (rather sadistically, I thought) an early start to my day. Off I headed up the walking trail for a view of the cliff. Even without a map, I’m pretty sure the, um, “markers” would’ve kept me on the right path.

When I reached the edge, this sight greeted me: 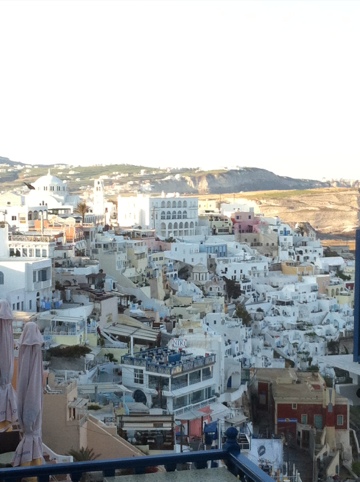 As I journeyed through the town, choosing random paths and taken in by the beauty of it all, I was reminded of the quote: “Not all who wander are lost.” How appropriate, I thought. The absence of an end destination is not the absence of a passion, or an innate drive. And as I pondered this, I told myself, ‘Wander without fear.’ This, a time of transition and uncertainty, is also a time of pure choice – a time to cherish, not to fear.

This morning, for example, I chose to stop at a local bakery for a pie! This wasn’t a traditional American pie, though, but rather, a savory spinach and cheese pie made using phyllo dough. Phyllo dough – think baklava – consists of thin sheets of unleavened flour dough, used in both savory and sweet dishes here in Greece.

Pie with a View:

Later on in the day, I decided to try Greek frozen yogurt. Those who know me well know my rather insane passion for frozen yogurt (though, really, it’s so healthy – even the cheesecake bits on top, I’m sure!) as well as Greek yogurt, which is thicker than typical yogurt and packs tons of protein. So, when I saw the sign for a product combining two of my greatest food loves in life, I couldn’t stop myself. In fact, I didn’t even try.

Interestingly, frozen Greek Yogurt here is made in a machine that closely resembles a slushie machine back home.

However, the yogurt (thank goodness) is not drinkable like a slushie. The yogurt possessed just a slightly icier texture than normal. The taste, though, was out of this world! It tasted like plain Greek yogurt with spoonfuls of honey, mixed together and turned into…ok, well, I guess it tasted like frozen Greek yogurt. Which was amazing! 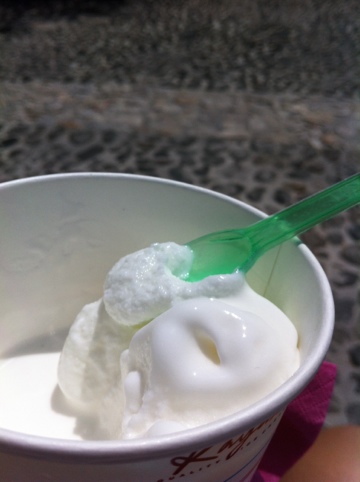 After the festivities of the morning, I was long overdue for a quick nap. I didn’t want to waste any time while in Santorini, though, so I decided to take a nap…here:

The black volcanic rocks of Kamari beach! I apologize for being so obnoxious with all the exclamation points…I just can’t help being so excited!

For my final pastry of the day, I decided to try the “apple pie” at a restaurant, which was shaped more like a very tasty apple sandwich:

An apple-cinnamon puree sandwiched between two pieces of cake…and actually, quite nice. The ice cream, too, was a rather interesting case. It seemed to contain a hint of banana (…?), but formed a great combination with the pie. 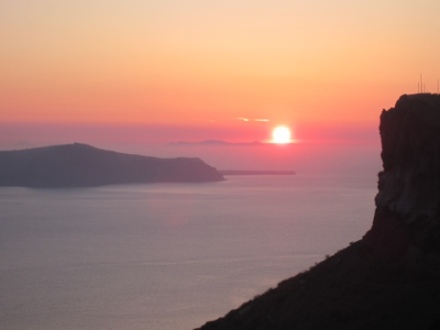 Have something in mind?